Yoga (Sanskrit योग yō-gə, “union or link [with the Divine]”)

Srila Prabhupada says: The culmination of all kinds of yoga practices lies in bhakti yoga. All other yogas are but means to come to the point of bhakti in bhakti-yoga. Yoga actually means bhakti-yoga; all other yogas are progressions toward the destination of bhakti-yoga. From the beginning of karma-yoga to the end of bhakti-yoga is a long way to self-realization. Karma-yoga, without fruitive results, is the beginning of this path. When karma-yoga increases in knowledge and renunciation, the stage is called jñāna-yoga. When jñāna-yoga increases in meditation on the Supersoul by different physical processes, and the mind is on Him, it is called aṣṭāńga-yoga. And when one surpasses the aṣṭāńga-yoga and comes to the point of the Supreme Personality of Godhead Kṛṣṇa, it is called bhakti yoga, the culmination. Factually, bhakti-yoga is the ultimate goal, but to analyse bhakti-yoga minutely one has to understand these other yogas. The yogī who is progressive is therefore on the true path of eternal good fortune. One who sticks to a particular point and does not make further progress is called by that particular name: karma-yogī, jñāna-yogī or dhyāna-yogī, rāja-yogī, haṭha-yogī, etc. If one is fortunate enough to come to the point of bhakti-yoga, it is to be understood that he has surpassed all other yogas. Therefore, to become Kṛṣṇa conscious is the highest stage of yoga, just as, when we speak of Himālayan, we refer to the world's highest mountains, of which the highest peak, Mount Everest, is considered to be the culmination.

In the west Yoga is popularised and most famous for its health benefits, both for the body as a form of exercise and the mind as a form of stress relief, relaxation and well being. However these benefits are just positive side effects for the real purpose of yoga. Yoga benefits the body, mind and most importantly the Soul. 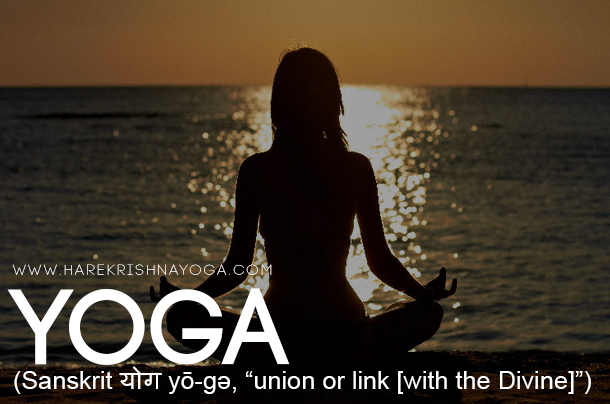 Yoga means, to link with or unite with God. However many impersonal schools of philosophy (practitioners that believe god is not a person) interpret this as merging the individual self to the supreme and becoming God. However, the soul does not lose its unique identity and never loses its individuality. By linking with God, the soul remembers its constitutional position and original relationship with the Supreme Lord Krishna.

When an individual has a desire to take a step towards Krishna, Krishna reciprocates accordingly and so corresponding to ones desires, ability and understanding, Krishna has devised many different approaches that one may take to Yoga. Therefore there are different yoga systems that an individual can follow, all with the eventual result to become detached from Material concepts.

The Bhagavad Gita dedicates chapters on the various processes of Yoga in which Krishna explains various yoga practices in a progressive system like the rungs of a ladder with the ultimate goal of Krishna at the very top of the ladder. Krishna encourages us to follow the instruction to the level of one's ability. 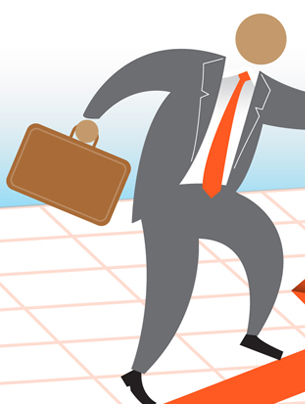 Karma means action and so Karma yoga is a duty based path aiming towards perfection in worldly actions. It is ideal for those attached to material activities and is a good stepping stone between material and spiritual life as selfless actions increases piety and encourages spiritual progression. By sacrificing the fruits of ones deeds to God, one is relieved from the results of selfish activities. An example of this would be to dedicate your exam paper to Krishna. You study and work to your best ability however you offer mindfully the results of the examination to Krishna.

Therefore, without being attached to the fruits of activities, one should act as a matter of duty, for by working without attachment one attains the Supreme. (BG.3.19) 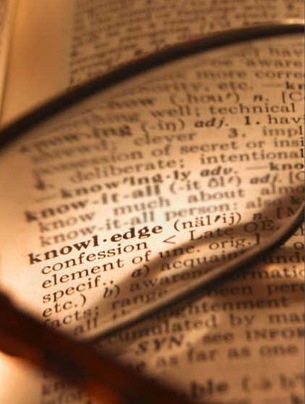 Jnana yoga is the process by which ones attains wisdom in the field of spiritual science. The process also encourages the minimisation of worldly pleasures and activities by introspective study and contemplation, the opposite of Karma yoga. The study explores the nature of the self and setting aside the false identity of ego and the illusion of the material world. 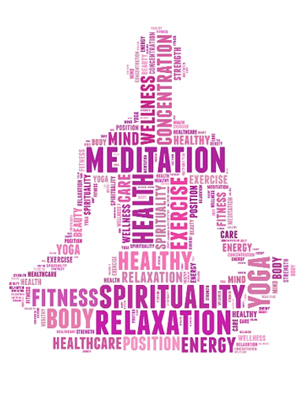 Union through Meditation and physical exercise.

Astanga yoga, (8 limbed yoga system), also known as Raja (Royal) Yoga is a comprehensive process divided into eight disciplines, beginning with physical exercises and finishing with meditation on God within the heart (supersoul). Many modern practices of yoga like Hatha yoga and Kundalini yoga are related to the 8 disciplines with practises to help control the body and mind. The physical effects of yoga exercises and meditation help to purify the mind and body and prevent and alleviate diseases, much like a physical and mental detox. Hatha yoga (union through life force) concentrates on breathing & sitting exercises. Kundalini yoga is also similar, identifying and aligning the chakras or the life force within. Dhyan Yoga (Union through concentration) is the 7th stage within Ashtanga yoga and involves the practice of meditation and concentration.

Ashtanga yoga is better suited to yogis from previous ages and is very difficult for modern day practitioners due to the strict and severe practice required to gain liberation via these methods. Practitioners that have mastered the discipline can acquire siddhis or mystic powers. India is full of such Yogis performing their mystic powers and attracting (cheating) followers that call them God. However these are mere side effects of yoga and are nothing to be amorous about as they bewilder and divert the disciple from the real focus and highest perfection of Love of God.

To practice yoga, one should go to a secluded place and should lay kusa-grass on the ground and then cover it with a deerskin and a soft cloth. The seat should neither be too high nor too low and should be situated in a sacred place. The yogi should then sit on it very firmly and should practice yoga by controlling the mind and the senses, purifying the heart and fixing the mind on one point. (BG. 6.11-12) 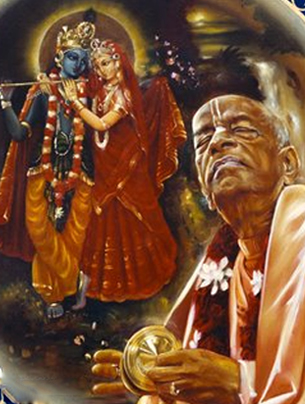 Union through love and devotion.

At present we are separated from Krishna, however Yoga is the path to 'join' and reunite with Krishna. It is not necessary to navigate through all the yoga types as bhakti can be picked up if you have the desire to serve the Lord. With jnana and dhyan the result is only the impersonal Brahma jyoti or parmatma (which will be explained in future posts), as there is no direct service to the personality of God head Sri Krishna Bhagavan. The path of devotion is stated in the Bhagavad Gita as the top most yoga. It may seem simple but as the practitioner advances they will see all of the other yogas within their practise. Bhakti or devotion is based on knowledge to go beyond material enjoyment and impersonal liberation and aim at pure, selfless service to a personal God.

And of all yogis, he who always abides in Me with great faith, worshiping Me in transcendental loving service, is most intimately united with Me in yoga and is the highest of all. (BG.47)